So, last month I was able to get in contact with the guy at Glitchworks and pick up an XT IDE parts kit. He's no longer making the cards/kits but was kind enough to still let me buy one from him.

I'm not great at soldering, I've done it a bunch in the past but assembling a whole IDE board was definitely the most advanced and largest single solder job I've done. All in all, it only took a little over an hour and it actually worked when I was done. (Thank god!)

Card assembled. I had to use an LED I had floating around. The parts kit was missing one. You can see my second XT partially disassembled in the background. It was nice having a second computer to try things on before taking apart the computer it was going to be installed on. 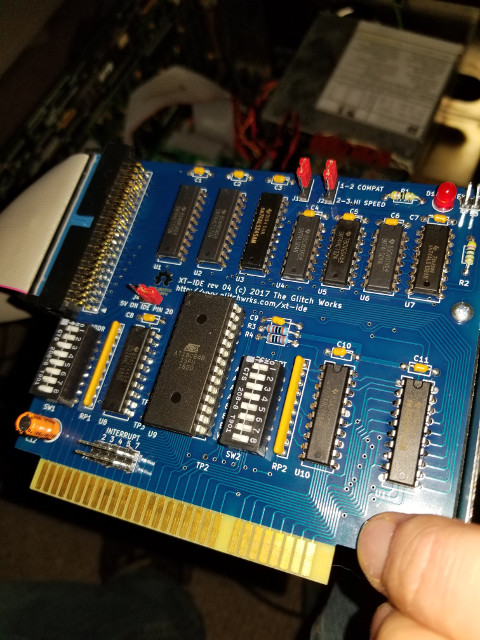 Solder job on the back. Not too terrible for being a novice. 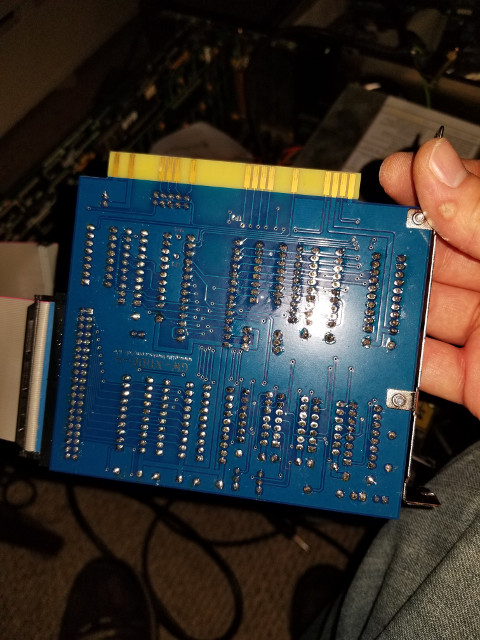 These next two pics are the "default" values for the dip switch settings. I got them off of http://minuszerodegrees.net/xtide/rev_4/XT-IDE%20Rev%204%20-%20general.htm 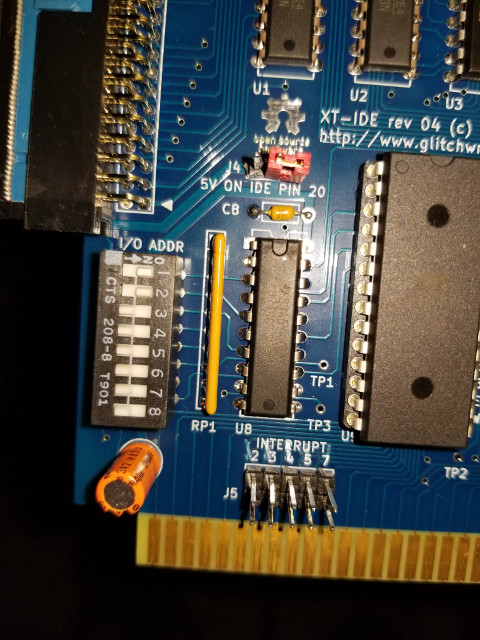 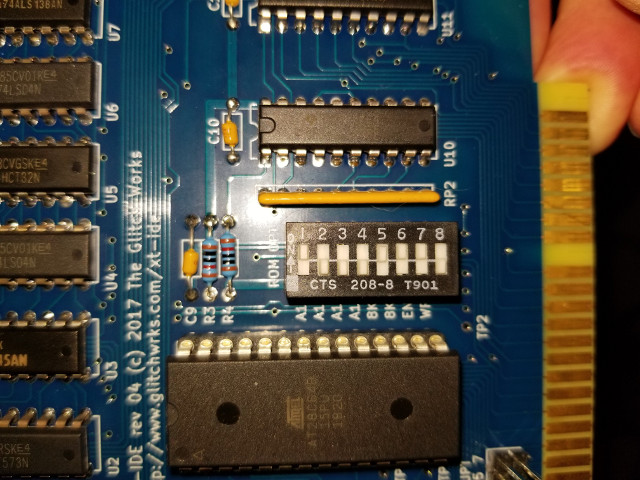 Back of "good" XT installed. (I used my "parts" XT for testing as it had more open ISA slots and was already mostly disassembled). The inside of the case is super cramped now between the FDD cables, MFM cables and now IDE cables. Every ISA slot is taken up except the one to the left of the modem (it has a daughter board on it with it's own 12mhz cpu.. no idea what that does but it makes it impossible to use the slot next to it) and the famous slot 8. The XT IDE can actually use slot 8 if you add in an additional ROM chip and set some jumpers. 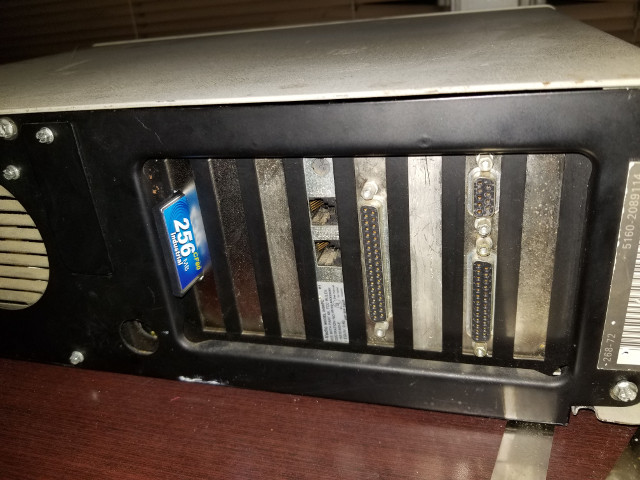 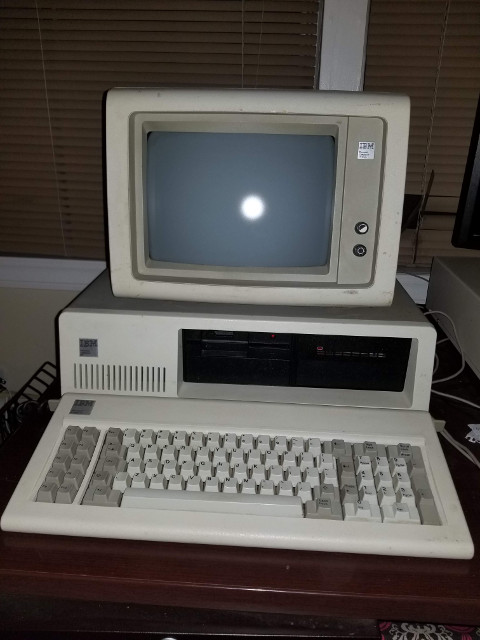 So, when you boot, it goes through the slow count up of the RAM (512KB in my case) then does a floppy drive/HDD seek before entering into the XT IDE menu. I haven't tried booting from a floppy before it hits the menu but it will not boot to the hard drive until one of the options in the menu is picked. Which is nice for reasons I'll put down later in this post.

XT IDE BIOS auto detects everything. It's amazing. It detects all the drives and even other drives if you add them. I plugged in an IDE drive and it worked flawlessly without having to do any configuration. (No settings sectors, heads, etc) 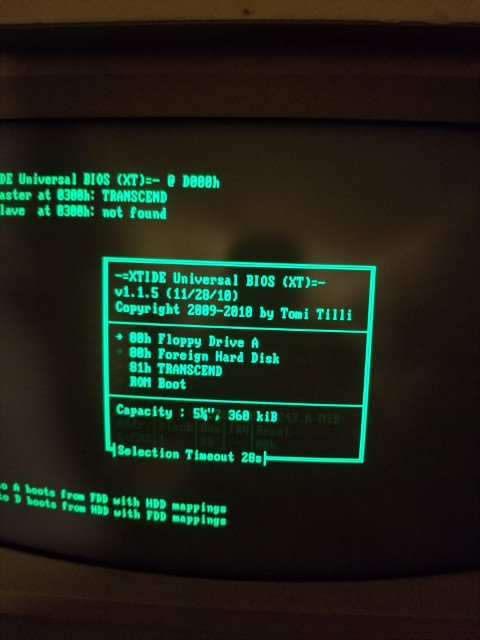 It calls the original MFM hard drive as a "foreign drive" probably because it's controlled by another ISA card. Still knew the capacity though which was pretty wild! 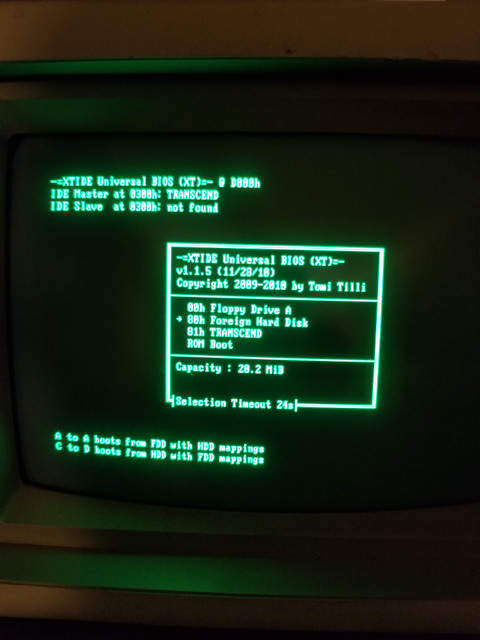 256CF card. Auto configured as well as has the manufacturer name already filled out. When I had the IDE drive in there, it knew it was a Maxtor as well. 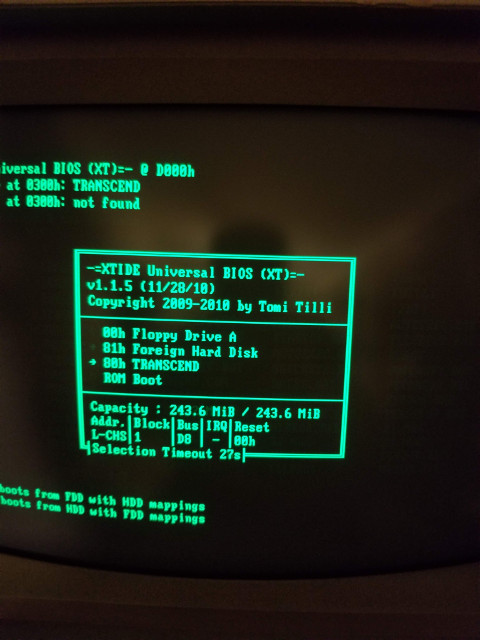 Booting to CF card. I'm undecided if I want to keep DOSKey installed. It's very useful but also eats up some of the 512KB of RAM. 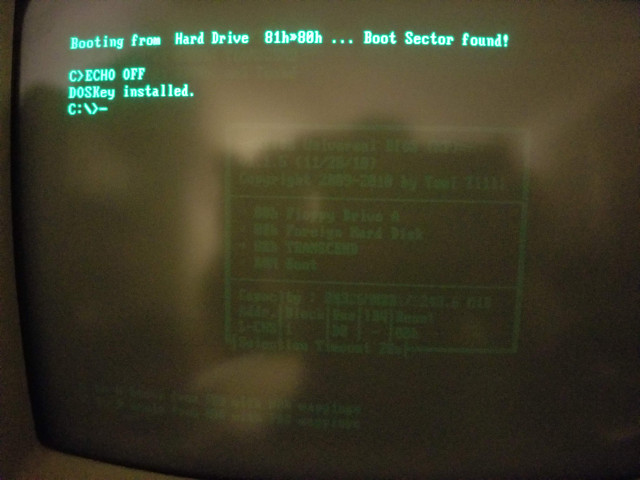 Directory listing on the CF card. The first "dir" command takes a while to complete as it calculates the 256MB free space. It's slow on a 20MB drive... just imagine that multiplied by 10. Good thing is that it only does it once per boot from what I can tell. 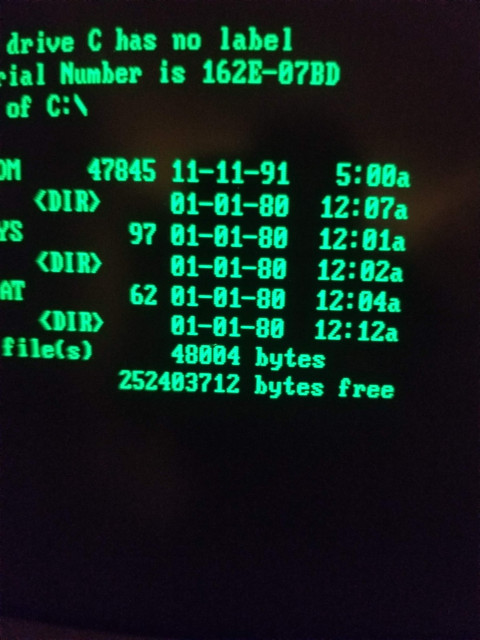 Another awesome thing that I was really surprised about is that the original MFM drive is auto-configured as drive D:! So, even though the computer is booted off the CF card it can still access the files on the MFM drive. 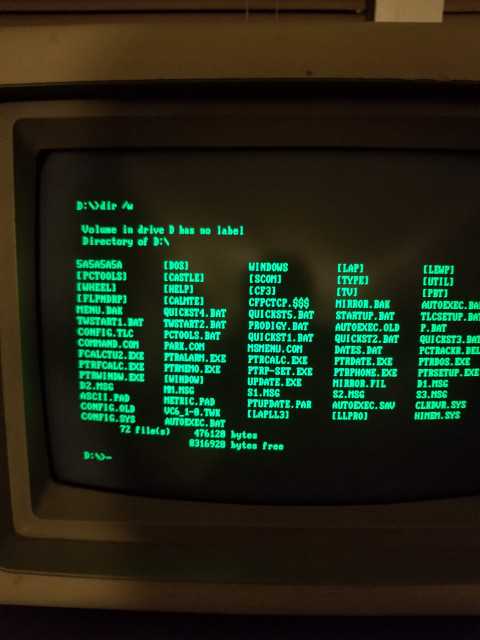 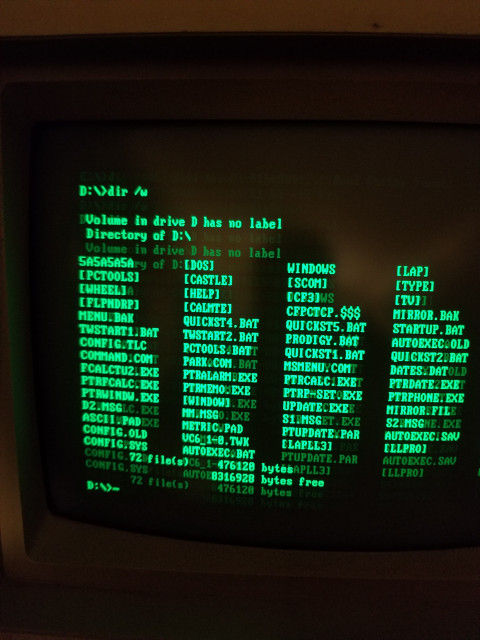 Booting to the original MFM hard drive. Selecting the old hard drive in the menu boots the computer just as if the XT IDE wasn't there. 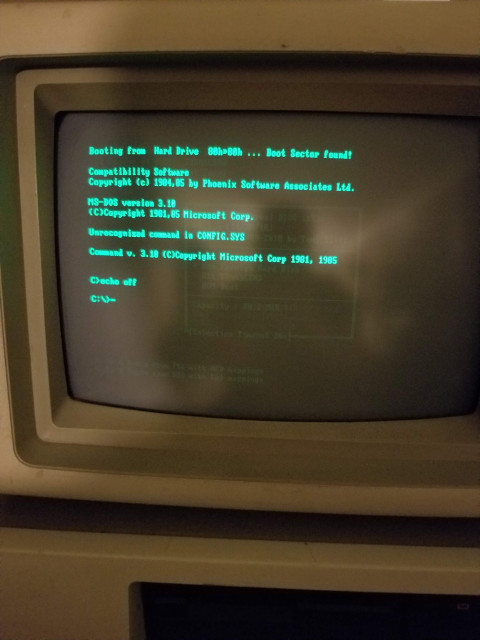 One of the good reasons that it doesn't automatically boot to the hard drive before going to the XT IDE menu is that from the MFM drive, you can't see the IDE drives attached to the XT IDE card. So if it were to auto-boot, accessing the IDE device would be impossible.

Example from booting to the MFM drive: 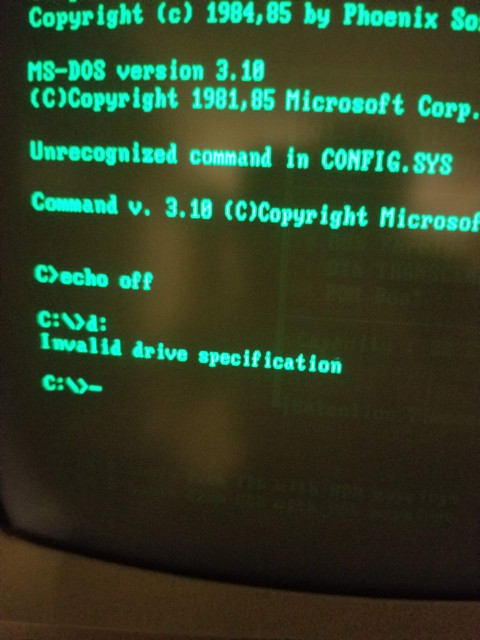 All in all, I'm super happy with this card. They're surprisingly harder to track down than I thought they would be. I figured I would be able to find them floating around everywhere but that doesn't seem to be the case. Now both my 486 and XT are compact flash, I hopefully don't have to worry about the inevitable hard drive death of the original 20-30 year old hardware. I actually tried to hook up one my 486 drives that was working before I switched it to CF a few months ago and it refuses to boot. It was already sounding funny when I swapped to a CF card, I can't imagine how much stuff I would have lost if I didn't switch over when I did.

My XT's hard drive was already brought back from the dead after unsticking the head and replacing the resistor that popped on the hdd controller board. In my mind, it's already on it's last legs at this point (the drive, not the computer). Good news is I was able to copy all the files from the MFM drive to the CF drive without a single error reading the data. I was surprised about that. It looks like the XT IDE handles reading/writing to the CF cards better than the internal HDD controller on my 486.

Anyway, I guess that's the end of my long ramble-y post. :D


Edit: I have to double check with my second XT, but I think something odd is going on with my graphics card. It causes the DOS prompt to hover in the middle of the line instead of at the bottom. It's sort of off putting typing with the cursor indicator located at a little lower than the cross section of the letter "t". Other than the prompt, the rest of the functionality seems normal though.

EDIT:
Here's what the inside of the case looks like with everything in there to give an idea of how cramped it is. 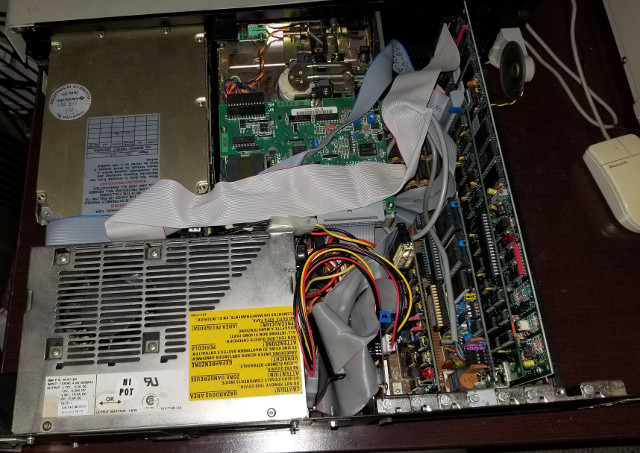